The China Study was a groundbreaking work by T. Colin Campbell, one of the world’s most renowned biochemists. In it, he describes how the diets of people in rural China led to better health and longer lives than those of their counterparts in America, who ate mostly animal products. This finding has been confirmed by other researchers around the world—and there are many reasons why people should ditch meat and dairy in favor of plant foods. Here are just a few:

The health-care system is broken.

If you’ve ever been to a hospital, you know that it’s a government run business. The health-care system is costly and broken, but there are ways to fix it.

Health care needs to be focused on prevention, not just treatment. It needs to focus less on life-care and more on health. The right diet can help prevent disease and promote long life in people of all ages.

The first major takeaway is that there’s a health crisis. Campbell says the current health care system is broken, and many others agree with him. The health care system in Alberta is focused on treating disease instead of preventing it. It relies on medication and surgery as its primary means of treatment, which doesn’t work for everyone. We need to focus more on prevention and less on treatment—and we need to improve access to information about what works best for people based on their individual needs.

The plant-based diet is a healthy way to lose weight and lower cholesterol. It can also help prevent, treat and even reverse chronic diseases.

The science on protein is complex.

Protein is not the same as meat. Meat is a high-protein food, but it also contains saturated fat, cholesterol, and other harmful substances that may increase the risk of disease. Plant foods contain protein—and lots of it! But plant proteins are also packed with fiber, vitamins, minerals and antioxidants that help prevent disease.

To make matters more confusing: Not all animal products are equally healthy (or unhealthy). For example, some fish such as salmon or tuna are low in total fat and high in omega 3 fatty acids (which can help lower cholesterol levels). Other fish like swordfish or shark have higher levels of mercury than other fish which could pose a health risk for those who eat them regularly

Animal protein causes oxidation and harm in your body.

Animal protein is bad for you. Animal proteins in your diet cause oxidation, which damages your cells and leads to aging.

Oxidation is a process that takes place when the body uses oxygen. During this process, free radicals are formed by unstable molecules called reactive oxygen species (ROS).

The more ROS you have in your body, the faster you age.

The world would be better off if we all ate plants.

It’s no secret that animal agriculture is a huge contributor to climate change, pollution, deforestation and habitat destruction. But did you know it’s also one of the biggest causes of species extinction? In fact, approximately 60% of all wildlife is directly threatened by the livestock industry. As Campbell writes: “The only way we can save nature is by eating plants instead of animals…You can choose to eat in a way that’s compatible with our planet or choose not to.”

There are several reasons why people should ditch meat and dairy in favor of plant foods.

There are several reasons why people should ditch meat and dairy in favor of plant foods. One reason is that animal protein is bad for you. Another reason is that a plant-based diet is better than an animal protein diet because it causes less oxidation, which means that your body will be healthier in the long run. If everyone ate plants instead of animals, then the world would be a much better place to live!

I believe that it’s time to ditch the animal products and embrace a plant-based diet. I hope you will take the time to check out his amazing book “Whole: Rethinking The Science Of Nutrition”, where he goes into detail about all of this. 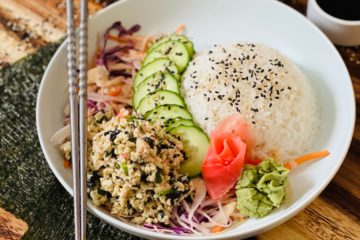 Eating is not only a necessity for living, but it can also be a source of joy and pleasure. I know that statement may seem strange to people who love food, but there are many Read more…